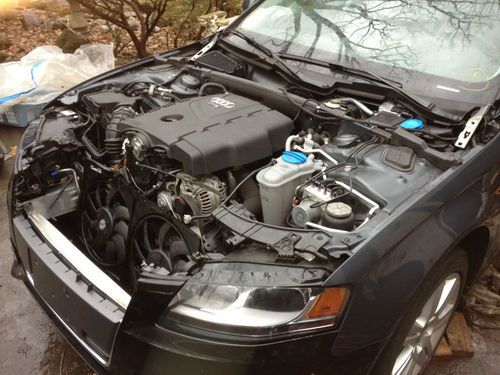 This car has a salvage title, but was NOT a flood car.  It appears to have had a tree fall on the roof.  It ran perfect and all electronics worked before having the hood, grill, radiator, condenser, universal joint housing (Right side), motor mounts, timing chain cover and aluminum turbo inlet removed two months ago. Body damage is to the roof, deck lid and passenger side quarter. The timing chain cover has been swapped with a cracked cover and the plastic around the fans is damaged.  These parts were added back in b/c they were swapped from a damaged car.

Before taking a ride in Audi's impressive Piloted Driving A7, we took a short spin up and down the Las Vegas strip to check out a smaller, but intriguing piece of Audi driver assistance technology called Traffic Light Assist that promises to help drivers make every green light.
Using both live and predictive data beamed into the vehicle's navigation unit via onboard wifi, TLA doesn't need a single camera to tell you when the light is going to change. Local data sources provide information about traffic light patters, and the in car system uses that data and the motion of the car to predict exactly how long it'll be until the green light goes red.
In practice, the system shows a traffic light icon in the central display (a head-up display would be a nice option), along with a countdown timer that reads the number of seconds before a light changes from red to green. Additionally, the system corrects (nearly instantly in our demo) for changing lanes and resultant changing signals; changing a straight-through traffic lane to a left-turn lane and signal, for instance.