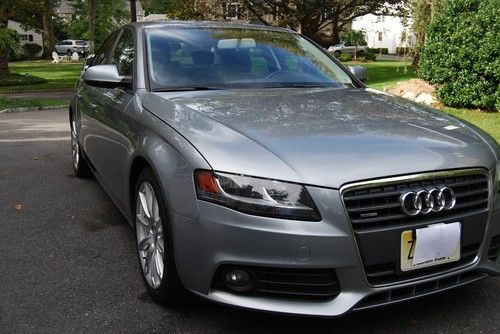 Condition: UsedA vehicle is considered used if it has been registered and issued a title. Used vehicles have had at least one previous owner. The condition of the exterior, interior and engine can vary depending on the vehicle's history. See the seller's listing for full details and description of any imperfections.Seller Notes:"Car is in great shape with only one door ding (small and pictured) and a small scratch below the passenger door (also pictured). Small curb rash on a few of the rims (pictured) and easily remedied. AudiCare (maintenance program) is included with this car and is good until March 2014. All scheduled maintenance has been performed. This car has never been in the shop for a mechanical issue. Feel free to ask any questions, I will tell you no lies."
Rare 6mt model always babied and garage kept!
Sports Package includes:
Tighter suspension
18" sports wheels with wider tires
Sports front seats
Aluminum trim
Heated Front seats
Iphone integration
Sirius Radio
Rubber Floor mats
I hardwired in a navigation unit when i got the car that I will include in the sale.  Starts up with the car, very clean installation.

The forthcoming science-fiction movie Ender's Game, starring Harrison Ford and Ben Kingsley, takes place in a high-tech world. So if movie-watchers are to be fully immersed in the story, every detail counts. That's why the computer-generated special-effects company assigned to the movie, Digital Domain, enlisted the help of Audi to design a future car that would fit seamlessly in the film's world - part of its $17.2-million investment in the movie.
Audi went all out, with Head of Audi Exterior Studio 1 Frank Rimili and designer Björn Wehrli assigned to the Audi Fleet Shuttle Quattro's design, which is so thorough and cohesive that we wouldn't be surprised to see cars like it on the road three-quarters of a century down the line. Rimili doubts that, but is "absolutely sure" Audi will still be around in 2088.
Watch the making-of video below to see all of the work that went into designing a car that will never see the light of day - in the real world, that is. If you're a fan of science fiction or the novel on which the movie is based, head on over to a theater to watch Ender's Game, which opens on Friday.