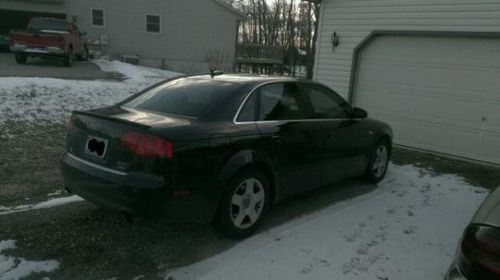 Have a baby on the way so it time to get something bigger. I have a set of summer rims that are included however they will need new tires.

File this one under: "makes sense to us." According to Car and Driver, the slick new gauge cluster found in the 2015 Audi TT will expand to other models in the automaker's lineup. In the near term, expect the tech to make its way into the next R8 supercar (with a special performance display for that model), as well as the upcoming, all-new versions of the A4 sedan and Q7 crossover.
Audi's new customizable gauges first debuted at this year's CES - it uses a 12.3-inch TFT display, and, while similar to the systems found in the Cadillac CTS, XTS and Mercedes-Benz S-Class, this system has the ability to show full-screen, three-dimensional maps. We had a chance to check out the new display in-person at CES, and found it to be impressive, though we're curious to see how distracting it is while driving.
Car and Driver says the system is still undergoing small tweaks before Audi officially launches it in the TT later this year. From there, the display will be standard in the R8, but Audi is unsure about whether or not to offer it as a standalone option in the higher-volume A4 and Q7 models.

Audi may only now be fully committing to the US compact car market with a range of A3 models, but it's got far more small car expertise than most Americans realize, and its offerings get even tinier, too. Back in 2010, Audi leapt into the subcompact premium fray - in all markets but the United States, Canada and China - with its A1. The A1 family has sold all right, but not quite as well as was expected, likely due to its price when optioned up. (It also doesn't help that the Volkswagen Polo is a great car on the same architecture and costs much less.)
But Audi seems compelled to make high-buck S trims of everything nowadays, so right on schedule, I've scored seat time in its new S1 Quattro. Under its gumdrop-colored hood is the very popular 2.0-liter TFSI motor. In this trim, it's good for 228 horsepower and 273 pound-feet of torque between 1,600 and 3,000 rpm. That's quite a lot of gumption for this little blaster - enough power for 0-60 in just 5.7 seconds.
My drive was originally supposed happen on a sub-zero frozen lake in Sweden, only Audi forgot to call Mother Nature and ask her to hold off on springtime. It would have turned into a slush drive and then a submarine test had I been told to stick to the original plan, so it was dusty, soggy and gravel-y pavement instead, which turned out to be a better real-world test anyhow. Plus, the car got even cuter when it was filthy.