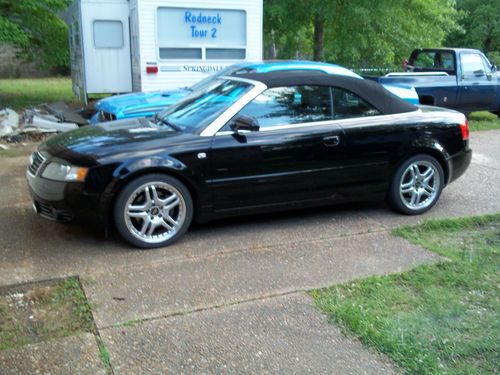 2003 Audi A4 Cabriolet. Has not been driven for about 2 years. The car overheated. The engine has been partly disassembled for repair. Cams were locked with Audi special tool and crank has not been turned.

I work overseas and my son was going to repair the car. He has not gotten to it and I have purchased a new car.

The car comes with several new parts still in the box. Water pump, timing belt and gaskets. I'm not sure that this will fix the engine. I would plan on a rebuild or replacement.

The rest of the car is in above average condition. It has some small dings and chips, but it is about what you would expect from a 10 tear old car.

I have set a realistic reserve. This is a car worth fixing.

With just under two more years until the next-gen Audi A4 hits the streets, it's not surprising that details are starting to leak out. The Brits from Autocar are reporting some information on the 2015 A4, although it isn't clear where any of it came from.
The most substantial news might be in regards to the plug-in hybrid version of the car. We've known for a couple years now that an A4 PHEV was being planned, but the report indicates that a trio of plug-in configurations are being planned, equipped with a 2.0-liter gas engine, a 2.0-liter diesel engine or a 3.0-liter supercharged V6. All engines will be paired with an eight-speed automatic transmission, and the A4 plug-in is said to have an all-electric range of up to 31 miles.
In terms of styling, the next A4 shouldn't stray too far away from Audi's current design language, but it will introduce a new version of the automaker's signature grille. Despite being about the same size as the existing A4, the fifth-generation model will drop some pounds thanks to various weight-saving techniques with the most obvious being aluminum body panels. Based on this info, we should see the A4 sedan and wagon in April 2015, an Allroad later in the year and a redesigned A5 lineup hitting the scene in 2016.

Audi has unveiled a set of new television spots that seek to continue the company's proselytizing of diesel-fueled luxury cars to the American pubic. With TDI versions of the A6, A7, A8, Q5 and Q7 available for its 2014 model year range, this is a subject that's obviously near and dear to the hearts of Audi marketers.
The first commercial, The Station, makes a play on the fact that many car buyers in the US don't associate luxury cars (in this case an A8) with those green-handled pumps at the "gas" station. The second commercial, Range, is a lot more informative (albeit less fraught with screaming and slowmo), discussing just how easy it should be to find a diesel fueling station in your long-range TDI before you need to fill up.
Continue on below for a look at both new commercials, or to have Audi explain them to you in great detail, via its press release.

Coming Soon To Our Shores With Two More Doors And A Trunk
The Audi S3 is not exactly a sales juggernaut, despite it being a bit of a legend for passionate fans of the small German premium genre. In most markets outside of Europe, people may consider such setups as the S3 three-door tested here, look at the price, and then think maybe they should just get a nice A4 sedan with greater practicality for similar cash. That certainly has been one reason Audi has never officially brought the S3 hatchback to the United States. And the 335-horsepower RS3 Sportback? Forget about it nearly everywhere but in Germanic regions, Switzerland and the UK.
All of which automatically turns the new S3 hatchback into an unattainable object of desire for many fans of the four-ringed brand. The good news, of course, for many markets not on the three-door or S3's dance card is that most of us will get a shot at buying the new S3 sedan that will be powered by the same drivetrain tested here. We reported heavily on the sedan version from the recent New York Auto Show and are convinced that there is much for North American shoppers to like.