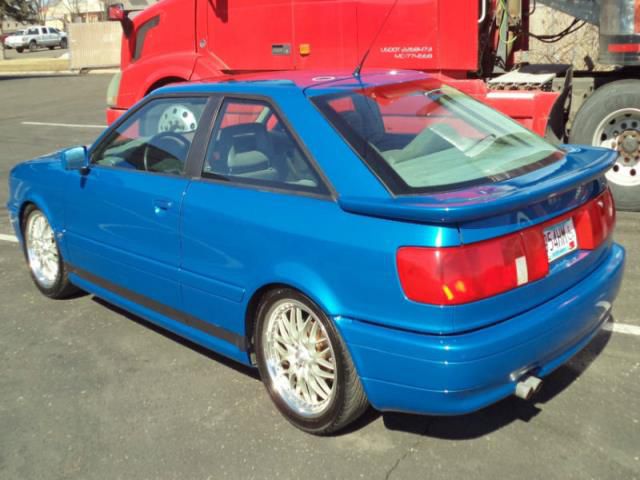 1991 Audi Coupe Immaculate Car with S2 Upgrades //// 2.3 liter 20V DOHC 5-SPEED QUATTRO ALL-WHEEL-DRIVE LEATHER, RARE POWER MOONROOF! So much MORE! //// This is a cherished classic Audi B3 Coupe that is in remarkable condition. It has been up very expensively upgraded with many S2 / RS2 mods. The special RS2 trademark Sprint Blue paint color has a very, very beautiful finish. Enthusiast-owned and pampered. All of the car's detailing indicates an impeccable show winner. This car has Generation II Quattro system with Torsen center differential and manually locking rear differential. Everything works, including all gauges, sunroof, controls, switches and lights. Car drives beautifully. Clean and beautiful leather interior with perfect wood trim.

Race teams are always looking for ways to shave hundredths of seconds of their lap times. Case in point: Audi is making some slight changes to its prototype racecar to make it ever so much more slippery as it cuts through the air.
Debuting at the second round of the FIA World Endurance Championship at Spa on May 4, Audi will be testing a long-tail version of its R18 E-tron Quattro racecar. As its name suggests, the long-tail car gets a lengthened rear section with the goal of improving aerodynamics. The long-tail will be run alongside the standard version of the racecar as a testbed for possible changes that might be in store, heading into the 24 Hours of Le Mans.
Audi did not say how many inches were added to the racecar, but as you can see in the image above, "long-tail" definitely doesn't take on the same meaning of classic long-tail cars of the past such as the Porsche 917. More information about the car, Audi's team and even some info about the track itself can be found below.

Audi is just a few days away from launching the third-generation TT at the 2014 Geneva Motor Show, but the new sports coupe has been so thoroughly teased, sketched, and spied that it almost seems like an anti-climax. Even the interior was thoroughly hinted at during this year's CES. But that's not keeping Audi from slowly revealing more and more parts of its new baby.
The TT is a modern automotive design icon. The first generation looked like nothing else on the road when it debuted, and the second generation added a needed dose of sportiness with the TTS and TT RS. The latest teaser video for Ingolstadt's sporty coupe shows more of its aluminum body than we've ever seen before, but the biggest mystery still lingering about the new TT is what engine Audi is slipping under the hood. Thankfully, the wait to find out will be quite short. Scroll down to get the best glimpse yet of the new coupe.