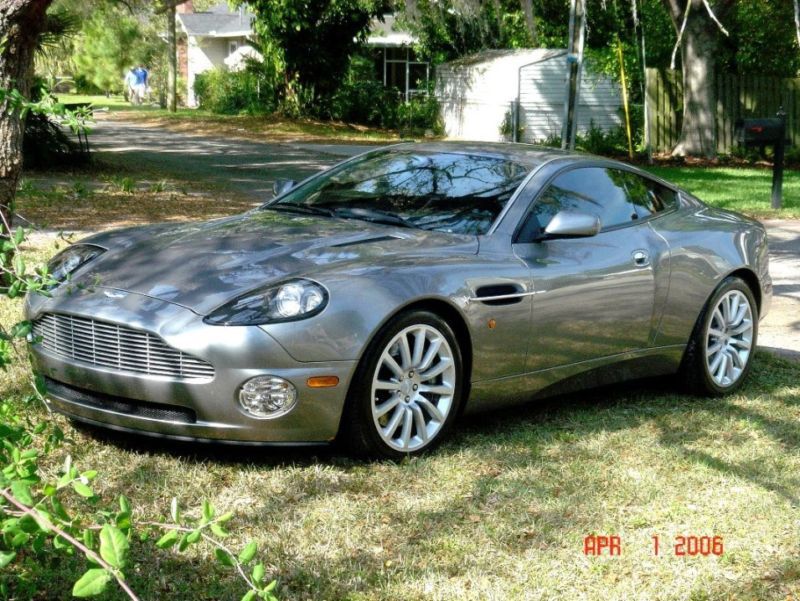 If you have more questions or want more details please email : cleotildemauro@netzero.net . Whereas professionally made-up, creatively retouched supermodels may not always look as good in person as they do
on a magazine cover, the Vanquish is exactly the opposite: a masterpiece of proportion, commandingly blending
elegance, power, and purpose. And this "almost new" Vanquish is exactly that. To stand in front of it is simply
mesmerizing. Just opening the hood serves up a feast of aluminum, magnesium, and other beautifully finished
materials. Even the shock-tower brace is made of naturally finished carbon fiber. Elaborate light-metal chimneys
duct hot air from the exhaust-manifold area out though functional vents in the hood. Elegance. Luxury and Speed.
James Bond "style".

No car stands any chance of being a great car without a great engine, and the this Vanquish certainly packs the
house in that department. Its 6.0L/ 460-hp V-12 is a development of the 420-hp unit of the previous DB7 Vantage.
The cabin is a study in aluminum and Connolly leather. Seating is superb: aggressive enough to support and hold you
in place, but never overly firm. Turning the ignition key and nailing the starter button is rewarded with a
sophisticated, barrel-chested, not-overly-muffled bark as the big 12 lights off. Even though the Vanquish motor is
the same displacement as the DB7 Vantage's earlier gen V-12, this one is wholly more aggressive: cammier, edgier,
and just flat louder. Aston-Martin's pipe benders and muffler mavens deserve an Academy Award for Best Achievement
in Sound. Aston claims that this flagship will do 0-60 mph in 4.5 sec. It's just got power everywhere:
musclecar-like torque down low, high-revving power up top, and even though the transmission has six gears, it could
get by with two, given the flexibility and width of the powerband. Open the throttles, and the intake and exhaust
systems just howl; back off, and it's quiet on the cruise. Production? Well, it was a rare one at that: Perhaps 60
of them were made in 2002, out of 200 or so built. Production increased to 300 the next year. And they were all
presold...even with a base price of $228,000.

Today, you can own one for a third of that. And their value continues to increase. This is the car that launched
Aston Martin's current direction. However, in my opinion, they got it right the first time. The "Vanquish". A
Legend.