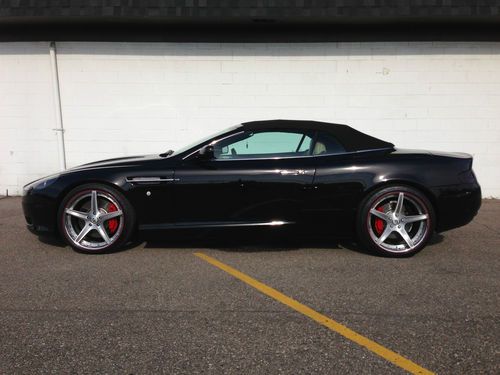 BEAUTIFUL aston martin 2 door volante, 55k, flawless condition , not a scratch , nick , or chip in sight anywhere, front seats were professionally re-wrapped less than a 1000 miles ago,custom sound system installed , factory head unit with jl audio clean sweep , jl 5 channel hd amp, 2 sets focal k2 components, jl w6 10 inch subwoofer in a custom fiberglass enclosure between the rear seats . the sound in an audio files dream. custom made  staggered  FORGIATO aggios wrapped with michelin pilot sports, all service up to date , impeccably maintained vehicle, bought from los gatos aston martin in california 2 years ago , before the tasteful mods were complete , so all the mods are less than 2 years old and everything in this vehicle is in working and new condition, any further questions that you may have please contact jim at 248-756-2000