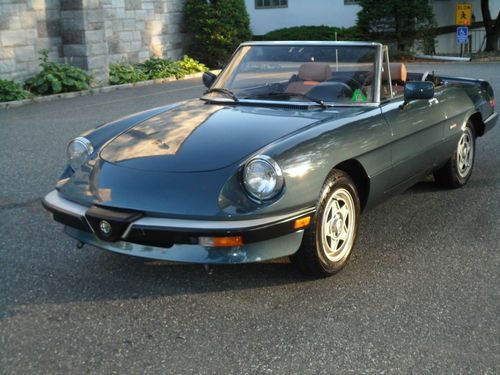 Condition: Used: A vehicle is considered used if it has been registered and issued a title. Used vehicles have had at least one previous owner. The condition of the exterior, interior and engine can vary depending on the vehicle's history. See the seller's listing for full details and description of any imperfections. ...
Selling my 1989 Alfa Romeo Spider Veloce. It is in exceptional collector-quality condition. Everything is original and there is no rust, which is incredible for a 24-year-old Alfa. The leather is perfect throughout. It has new filters, upgraded spark plugs/wires, distributor cap (International Auto documentation). The paint is beautiful, and has recently been re-sprayed to match exact factory specifications by Alfa specialists (have documentation). New cloth soft-top. Vehicle CarFax history is clean. As expected with all Alfas, Ferraris, and Fiats of the time, the gearbox takes a few minutes/miles to warm up. I have documentation from Alfa Romeo confirming that this model (late series 3) is a limited run model and only 532 were made, which is why the car is registered as a Collector Vehicle. The Hagerty Valuation Tool identifies that this car should be valued between $11,600 and $14,500 as of April 2013. Please feel free to reach out with any questions or to schedule a time to see the car in person.
Driving video shows town and highway driving. Car is driven often and runs perfectly: youtu.be/c_LGyWLAHjQ