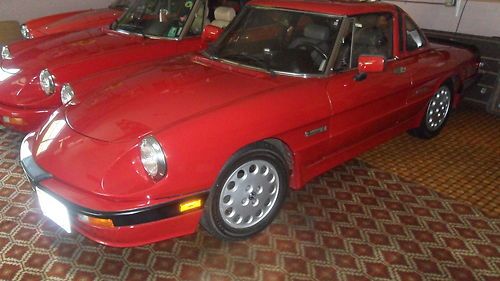 Near perfect Alfa Quadrifoglio runs great. The only problem with this car is the spare tire well is rusted see pictures. I have a new well and it will be included with the car. Carpet inside drivers door is worn from getting in and out also needs a new fuel sending unit Seam on back drivers seat has come apart and needs re sown. Everything else works as it should. Has hard and soft tops soft top is in good condition, hard top has a small chip where it meets the body on drivers side also seen in pictures. Stored in a heated garage since 2004 and only driven in summer. With  very little work this would make a great collector car. Sold as is with no warranty expressed or implied. Buyer to arrange and pay shipping costs. Ask any questions before bidding.