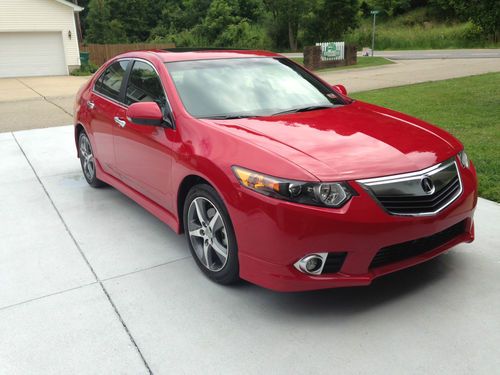 Condition: UsedA vehicle is considered used if it has been registered and issued a title. Used vehicles have had at least one previous owner. The condition of the exterior, interior and engine can vary depending on the vehicle's history. See the seller's listing for full details and description of any imperfections.Seller Notes:"NO RESERVE....This TSX is in excellent condition. This car features custom dual Audiovox HR7012 headrest dvd players with remote and two headsets that match the existing leather interior down to the stitching!! There are a couple of tiny rocks (shown in pictures), very slight curb rash on wheel, and a very small scuff on the front passenger door can be buffed out (can barely be seen on photo). This is an excellent, fun to drive vehicle!! Title is owned outright. Good luck on the car and thank you for looking!"

NO RESERVE...Look at this beautiful red Acura TSX SE.  This car features custom dual Audiovox HR7012 headrest dvd players with remote and two headsets that match the existing leather interior down to the stitching!! Very low mileage...this car has been a blast to drive.  Very nice ride quality, cornering, sporty feel, paddle shifters are cool!  This car is in excellent condition and I have included the very minor flaws because I want to make sure you are 100% satisfied with the purchase.  This TSX does include two sets of floor mats (one for all weather and one carpet).  It also has the existing Acura warranty left on it.  Thanks again and good luck!!