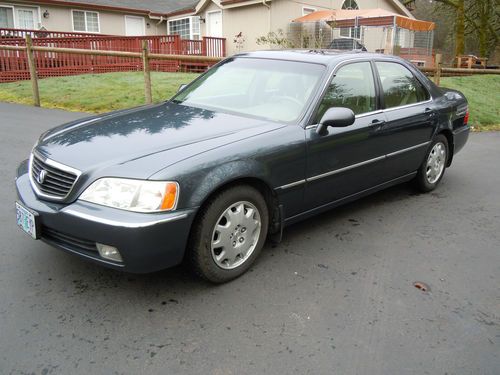 Beautiful 2004 Acura 3.5 RL. Low miles at 84,xxx. This vehicle is still driven daily and will have a few more miles on it than show when sold. This vehicle was reconstructed in 2010 by Peters Import Auto in Salem Oregon who is an exclusive Acura Rebuilder. This Acura had 60,038 miles when rebuilt. We have driven in 23K miles since rebuilt with no issues. It had no frame damage. The damage was in the front left of the car. The car runs and drives great. At its last service we were told the AC needed to be recharged. We just bought a Brand New Ford Cmax Energi and the Acura has to go. The KBB site shows the fair condition value at $8406 and excellent condition $10,146. I understand the diminished value of a rebuild car and am pricing accordingly. The RL currently has studded snow tires used two season on it. The tires taken off the car needed replaced so we did not keep them. This car does have Navigation, multi disc CD, heated seats, power windows and locks, remote entry with two fobs, Homelink. We are located off of Interstate 5 between Salem and Albany Oregon. We will deliver the car to the northwest shipping hub in Troutdale Oregon for $100.00  (80 miles from my home) or free if buy it now is used. Color exterior is Carbon Grey Pearl and interior is Parchment. This Acura is well equipped and an excellent buy. The title is in my possession. Please feel free to contact me with any questions! I always encourage anyone purchasing a car over the internet to have it inspected. This is a used car. It does have slight scratches that may not show in the photos. This car is sold as is. Thanks for looking!

The squiggly lines shown in the listing preview photo on the drivers side front fender are reflection of a tree beside the car!