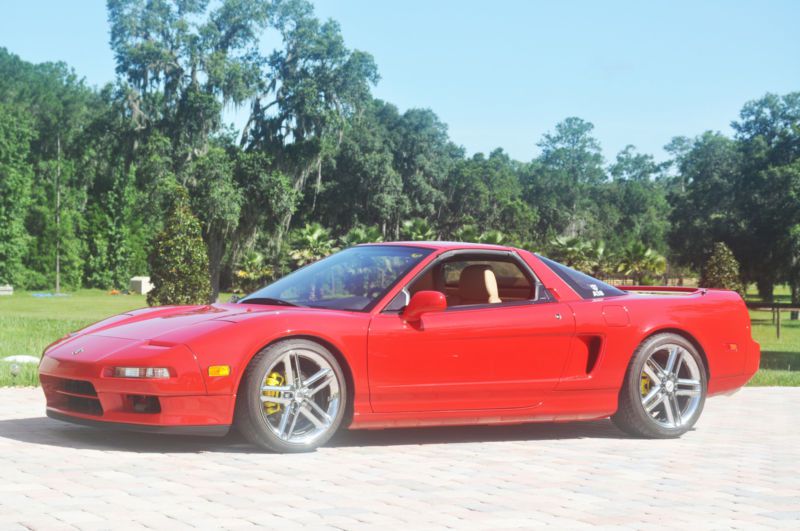 Just email me at: gwendolyngbbarkdull@fulhamfans.com .

Offered for exclusive sale to the proper collector this 56th 1996 Acura NSX-T in 'Factory' condition. Used by Zymol
for online and print advertising and displayed at select events. This brilliant example of finest hand crafting
from Acura has only 11,000 miles. There are multiple caveats to this sale. First; the car must NEVER be track
driven. Second; the original factory items (Hard Cover Book, Flashlight, Original Documentation, Tire Gauge,
Service Manuals, Key Fobs, Paper Weights, Factory Silk Cover and Zymol Vintage) must remain with the car. Third;
the only care products used on the car are Zymol which will be supplied to the new owner free of charge. [Zymol
Vintage +]
This number 56 of the Acura NSX-T is the fulfillment of Acura's (Honda) long-standing desire to build a lightweight
mid-engine sports car that would advance the state of the art and radically alter the commonly accepted perceptions
of exotic, limited-production sports cars. The cabin-forward, mid-engine, long-tail design, offers outstanding
ergonomic comfort for the occupants while the mechanical components provide power with dynamic balance. The
Titanium alloy engine features dual overhead camshafts, 4 valves per cylinder, Hemispherical Pistons, Variable
Valve Timing and Lift Electronic Control System (VETC) and Variable Volume Induction System (VVIS) for improved
torque and more power. Since the NSX was inspired by the Honda Marlboro McLaren Formula One race car, it has a
perfect power-to-weight ratio. The all-magnesium-aluminum suspension is the same design used in Formula One race
cars, it features upper and lower control arms at the front and rear, anti-roll bars and coil-over shock
absorbers.
In the five short years since their introduction, the 1996 Acura NSX established an enviable reputation for superb
engineering, high levels of performance and exceptionally intelligent ergonomic design. The Acura NSX has been
widely recognized as the most perfectly balanced car possessing excellent road manners and a more than spirited
personality. These attributes have come to be perceived as the complete design and engineering elements of the
Acura NSX.
This is your opportunity to own a 'Perfect' NSX.