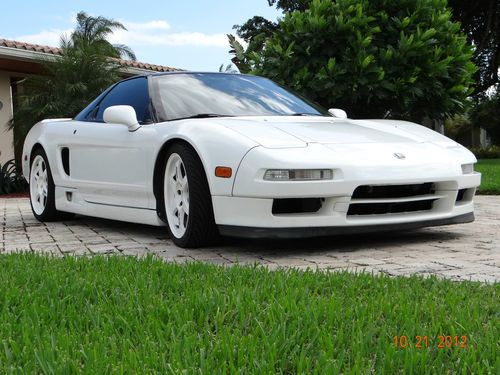 Assuming all goes to plan, automakers test their vehicles to the breaking point in the months and years leading up to that vehicle's actual release into the public. Which is good, because it's much better for a car to break in glorious fashion in the hands of the company that produces it than in the driveway of an owner who just spent their hard-earned cash to get it.
Such was the case with this production-guise Acura NSX prototype that we saw running around the Nürburgring just the other day. We can't be 100-percent certain, but the burned-out carcass is wearing the same number plate as the car that was spotted earlier, so it's likely the very same NSX. We have no idea what was the cause of the blaze that turned this Acura into the car-b-q you see pictured above, but our spy shooters on the ground in Germany say it was not involved in any collision, having caught on fire all on its own with engineers behind the wheel.
The good news is that nobody was hurt, though the car is quite clearly a complete loss. We're sure there's another ready to to test in the burned car's place... just as soon as the engineers at Honda figure out exactly what went wrong. Have a look at the smoldering aftermath up above, and feel free to scroll down below to see a video of the car in much better circumstances.